We decided to break up our mammoth gardening weekend with a trip out. There is still so much to see in this beautiful country. So we picked a route in the Catlins, near to Colac bay, but we decided to do forest rather than beach this time.

The sign should come with a disclaimer, and a notice that says ‘not for the feint hearted’! We usually take the ‘approximate time’ with a pinch of salt, because in the Uk, they cater for the slowest of the slow when they approximate it. Here in New Zealand they cater for the average fit and healthy tramper, so times tend to be rather accurate, if not a little ambitious.

I really wish we had taken the garmin with us, I would love to know what height I climbed in total, because it only seemed to go up, and never down!

After a short easy flat stretch, you were launched straight into large long flights of giant steps, up and down the gorge, across and back across streams, and up and down some more. Although, I swear there was more UP! Had I known the degree of difficulty I wouldn’t have done this morning’s bike ride!

This was the the map we worked off, which really doesn’t tell you much. We wandered back and forward looking for the waterfall track thinking we had forgotten or missed it, then discovered that we hadn’t reached the river yet, there was in fact several rivers in this forest most not marked on the map!

It was a beautiful route, We only saw one girl who was almost finished and passed us as we started out. You really did have a sense of the fact that you were in the middle of nowhere. I was glad the route was consistently well marked right through to the end.

We stopped for quite a while at the two waterfalls, after scrambling in the undergrowth and discovering a third waterfall (thinking it was the one marked on the map that we hadn’t got to yet! All in all, it took us 3 hours.

Some beautiful photos, and a great alternative way to spend the day, and get fit, whilst seeing the countryside too! My legs are tired now, and that is an understatement!

I will say one thing I noticed, how very different a forest looks here in New Zealand. At times, I really felt like I was in the jungle. Apparently it wasn’t swampy enough or humid enough for it to be a jungle! Ferns and palm trees springing up everywhere, It just not the forest view an English person is used to. I did notice though, that the fern tree logs laid on the path for grip, on steps etc. were much better than wood for traction under foot!

Take particular notice of the photo of the upper falls, the clear one. Mark took a precarious acrobatic route to get across the river to take the photo, then was initially unsure how he was going to get back across! He almost resorted to removing his shoes and considered trying to wade across!

the end of the fLat! 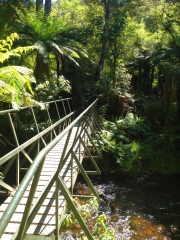 many many steep steps! 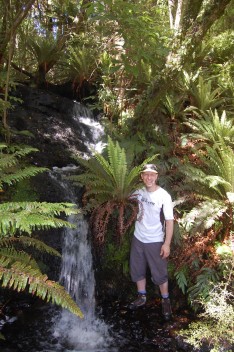 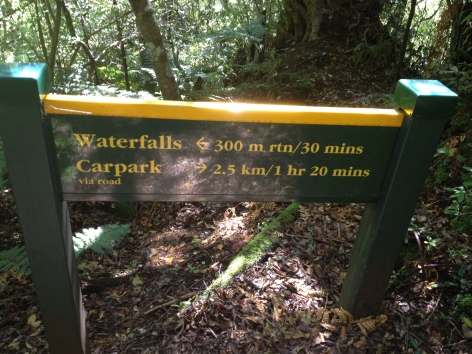 my view of the upper falls 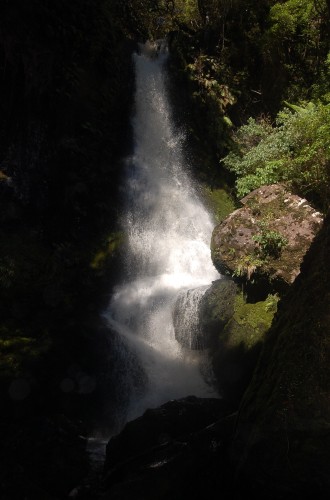 Upper falls, precarious route to get this photo!

Oh, I almost forgot. Here’s the ‘road’ that the map mentions, that we arrived out onto for the last part of the tramp!!