When I opened the curtains today I thought that the day was doomed. The rains had started and didn’t look like they were going to stop! No matter, that never stopped an Englishman!! So, off we went to explore the local coastline some more, after realising that waiting wouldn’t work!

In typical Southland style, the day improved gradually as time went on, and in fact we managed to avoid the showers, pretty much!

We started with a little hidden gem – Mores reserve. Situated on one of the adjacent hills looking down on the bay at Riverton, you get a panoramic view from the top of the hill. It is only a short walk from the car park too, which is even better when it is raining! There is a beautiful walk down to some really secluded beaches, I actually haven’t seen a single soul each and every time I have walked it, but the weather was a a little too volatile to try that, so after a walk to the lookout, we walked the mores track to another lookout, this one looked down over curio bay. The beauty of both tracks is you were predominantly in the shelter of the bush so when the hailstorm came down, we didn’t actually get that wet! 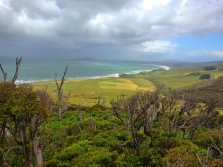 From there we popped into Riverton for a spot of lunch. 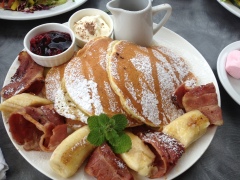 I thought I was ordering a snack, when I received this mountain of pancakes!!

Go to that cafe on Riverton High street, its well worth it!

The weather had improved by now, so we decided to drive west rather than back home. This took us to ‘Cosy Nook’ also known as Mullet Bay. This was a Maori settlement, one of the first in Southland. It became a fishing bay, but in more recent years it has been fished out so most have moved to Riverton or Bluff. A few old fishermen still live here in the tiny cottages that were originally built. They aren’t allowed to extend and don’t officially own them. It is so tiny and secluded, its a curious little place. Beautiful, yet bleak in the winter I expect!

Here’s a little video, the weather today made the sea look very different to my last visit.

From there we drove onwards up the coast to another beautiful little cove, Monkey Island.

This little island is only an island at high tide. We had checked the tide times and were JUST able to get across with dry feet – the tide was just about out far enough!

The weather however, had turned somewhat, and now we were in danger of being blown away! Happy summer eh!? Oh well, it didn’t stop us having a good day! 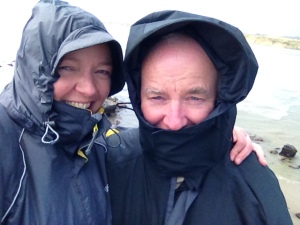