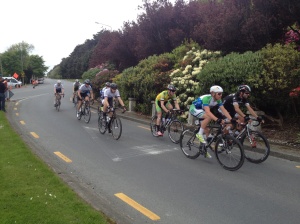 What happened this week? Just some work, rowing, cycling, swimming, new chickens and the Tour!

This week, I managed a few personal goals, the first being a long ride. I haven’t done a long ride for a while. I love it here, so it’s always great to get out and be at peace with nature.

You know its quiet when the only sound you can hear is the cows tearing the greats as they eat!

This was the last week’s regular work trip to Dunedin, so I had to have my moment on the hill with the view before I went.

On Friday we decided to go to the cinema, it’s been a while since we went. Before the movie we went to Suzie Q, a local tapas bar that we haven’t tried before. It was quite amusing, having been to a tapas bar much closer to Spain! The food was lovely, but the menu options much shorter, and the portions ‘Southland sized’!

We chose the film Interstellar. I thought it was just another ‘the world is going to end’ movie but it was actually really good.  It’s very long (3hours or so) but well worth watching, in my opinion. 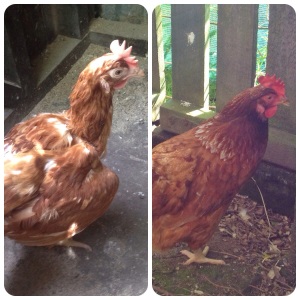 This week we also got two more chickens, rescued from the battery farm to replace the two we have lost. It has been really amusing. The two we already have have been putting the two new ones in their place, poor things. I wish I could talk chicken, cos I would remind them where they came from too! Here’s the contrast between one we have had a while and one we got this week. The one on the right is one we rescued in March. She in fact looked worse than the chickens we got this week. Amazing transformation.

Saturday was the last stage of the Tour of Southland. We missed most of the tour, due to work, even the stage that passed by our gate! So we made a point of going to watch the final stage. It was a great nail biting finish.

5 break away riders got a lead of 1:40. They still had that lead coming into the last 10km. But the peloton was determined. They worked well together to catch the break away on the last lap of Queens Park, so as they turned to enter the finish straight sprint, it was anyone’s game. The stage winner was actually not one of the break away. Brilliant to think such an event takes place right here in Invercargill.

Sunday was a day to catch up with The garden, a never ending job! We were rewarded today with visits from some Tui, 3 at one stage, attracted by the nectar in the flowers of our Kowai tree. I always feel honoured when I get to see a Tui up close. It’s a rare moment.

I have never had the privilege of seeing one so close, I didn’t realise that they had some blue in their feathers, as well as their trademark white beard. My cat was quite interested, I had to keep hold of her to prevent her climbing the tree after it!