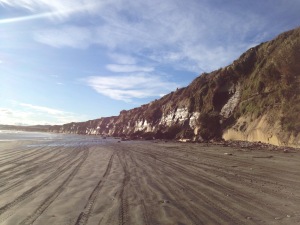 It’s been a bleak week weather wise: unprecedented snow up in the mountains, and the New Zealand a herald was reporting that we had the ‘worst weather event on the planet’ at the time. Nice. Winter has arrived! Still, only 1 month to go till we hit the winter Equinox and it all starts looking up! We even had the first frost of the year this week. But, this weekend had a welcome break in the weather allowing us to enjoy our beautiful coastline.

I do like how, despite the dark mornings now, it stays light right through winter till 5pm, and with my new slightly odd working hours (being mostly outside everyone else’s working hours!) I get time free during the day, which means I do see the daylight.

As a teacher it used to feel really bleak, going to work in the dark, coming home in the dark and never being outside in between. 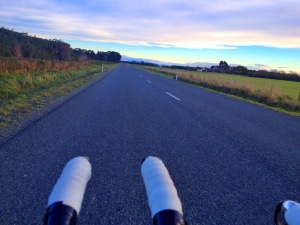 I am able to reveal two piece of news on the work front. I have secured a role as a casual on call swim teacher for Invercargill City council. It’s a nice flexible way in which enables me to learn how they do things, but with working hours on my terms, meaning I can still prioritise the business.

The swim test did make me laugh though.

I had to show I could swim 200m inside 6.5 minutes, tow a dummy 25m and lift it out onto the side, get a brick from the bottom, swim while dressed and tread water for 5 minutes. Well, here’s how it went.

I swam 200m in 3 mins 25 sec. (A lifeguard needs to do it in 4 mins 30 which is meant to be hard!) Treading water was effortless, I had a convo with him while I did it, he decided to not bother getting me to swim the 25m clothed, deeming it to be a waste of time. The dummy part was easy, let’s just say, as was the brick.

The second piece of news is that I have been asked to be part of the expansion plans for spin classes at YMCA and starting next week I am doing three classes a week for them now: Tuesday early, Wednesday lunch and Thursday early. I LOVE doing them, it doesn’t feel like work at all!

Due to a fixtures clash with soccer, we had the privilege of having a premiership rugby fixture at Invercargill this weekend: Highlanders v Chiefs. The winner would go into the play offs, so a very important game for them both. It was cold, but fabulous night out, we got to sit in our new sly labelled season ticket holders seats! 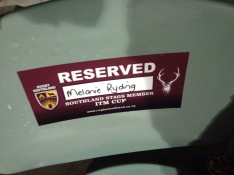