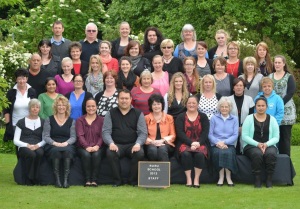 Well it’s been a weird week. I have witnessed birth celebrations and a funeral of a friend all in the same 7 days. My head doesn’t quite comprehend it.

I cannot accept that I am now of an age where I start to bury my friends, I’m far too young for that. I’m sure Kellie wasn’t ready to accept that her life would be over at the age of 34 either. To be honest, her recording she made to be played at the end of her funeral has haunted me ever since. Who’d have known this lay ahead when this photo was taken in 2013. I’m on the back row, third from the left, Kellie is on the second row, to fourth from the left.

A voice from someone who knew, when they recorded the message, that they would soon die. I cannot quite comprehend that.

She said that she wanted everyone who was at the funeral to leave that day promising they would wring every last moment out of life and not waste any of it, never put anything off, never ‘leave it till tomorrow’. She said she felt she had been dealt a raw deal, that life wasn’t fair.

How unique to hear something so heart felt and poingnanat from someone so brave. I don’t think there was a dry eye in the room: a huge double conference room crowded with 500-600 pepople, standing room only.

When I heard the news originally, I wrote her a poem and sent it in a hand made card. Her thanks via FB were to be the last words I would get from her. Selfless and appreciative to the end. On her death bed and too unwell at this stage to receive visitors, she merely described herself as ‘quite crook’. I was already living my life by the ‘don’t waste a moment’ rule as a result of suddenly losing mum, but the message spoken by Kellie was a huge loud reminder.

Some people leave a mark
In everything they do
This is my lasting memory
Of when I first met you.

Thankfully I saved a copy of the poem I sent her – quoted above.

By the end of this week I had managed to catch up with work allowing me most of the weekend off. A refreshing break much needed, for sure. We toasted a beer to her on Saturday afternoon and had a meal out at lunchtime, a lovely wander around town aimlessly, just doing nothing much.

I even managed a Sunday afternoon swim: nice for exercise not to be spin bike or bootcamp related for a change!