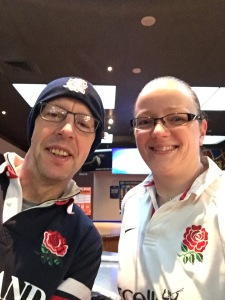 Well we were ready for all the exciting rugby action this weekend but it didn’t exactly go to plan, did it!

We went to Dunedin for the weekend, to watch the Southland Stags play Otago: a local Derby that always provides some action. And did it ever, but not the way we expected.

Stags captain Jamie McIntosh was send off on a Red card in the 25th minute, which kind of sealed the game for Stags, they never recovered from there. Added to that, he is a front row so Stags were forced to sub another player too.

The organisation of Forsyth Barr stadium didn’t add to my mood. They chose to only open one food stand / bar, meaning that I stood in line for drinks for 45 minutes, missing the last 5 minutes of the first half and half of the second half. With a final score of 61-7 it seemed I didn’t miss much, but that isn’t the point!

So, disaster no 1 for our rugby weekend, Stags are in danger of not even making the play offs, making it one of their worst seasons in a number of years. super. Oh well, off to the pub! 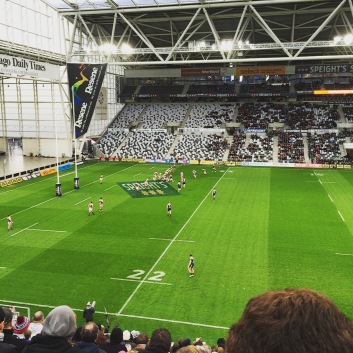 We decided to get up early the next morning to watch England play Wales. All the local bars were open and showing the game: we ended up with quite a crowd of English and Welsh supporters in the bar we went to. 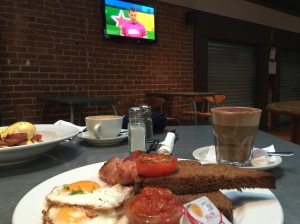 Once again, that too didn’t go as planned. Although, its really interesting watching en England game having lived here for a few years, only watching local rugby. Oh how different it is, We couldn’t quite believe it! I actually wasn’t that inspired by their game play: we are too used to watching hard hitting running rugby! The all blacks would have converted that last run in into a try, at least!

So, with the rugby written off, we went shopping!

Lovely sunny drive home through the Catlins and a compulsory stop off at the Whistling Frog Cafe! Beautiful spring day: lets hope it is a sign of things to come. 🙂 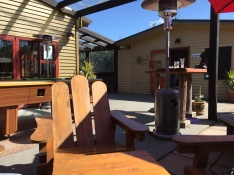 The road through from there to Invercargill suffered some flood damage and had started to crack the last time we came through: all the heavy winter rains. Just after our lat pass through we saw the road had suffered a land slip and today, this is what it looks like!

The white line that was the centre of the road is now JUST visible at the edge, just before the land falls away. They have had to cut into the left rock bank to move the road temporarily over to the left, so that traffic can still get through while they plan what to do with it!

It all slipped away in a matter of a day or so after we last passed through. Scary.