The Boxing Day weekend was forecast the best weather during Christmas so we decided to take the opportunity and go camping. It’s hilarious really on reflection: I have always been known as the one that prefers glamping (at least, preferably a hotel!) but since living in New Zealand, to be honest, this country is best enjoyed off the beaten track and away from tourists, which has led us to prefer much more basic camp sites.

By basic, New Zealand usually means a long drop loo hut (perhaps an outdoor barbecue base if you’re lucky, in which you can build a fire) and not much else. A tap, if you find one, is usually only operational during high season and taken from the river so still needs purifying. Camp sites near lakes and rivers usually are best, so you have a water source. Yep, basic as!

But, you know they tend to be the best because commercial roads haven’t been built so the surrounding countryside is not spoilt at all.

We discovered that Piano Flat and Mavora lake are the only DOC run camp sites in southland. Seems silly to go to somewhere we have already been when there is still so much to see so we chose another camp site at Moke Lake, just outside Queenstown, in the mountains.

Theres a fire ban right through central Otago, so we weren’t able to use our wee portable barbecue, but marks little gas camping stove always does just fine. 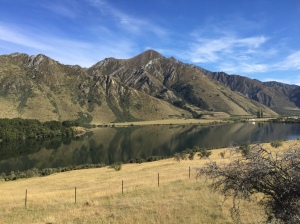 A 7km gravel road up into the mountains leads to Moke Lake camp site, which turned out to be quite busy (even by our standards!). It seems everyone else had the same idea as us with the great weather forecast! That’s ok, the camp site was designed in such a way that we could still have a fab lake view and privacy too. Perfect.

From the camp site there was a loop track around the lake (which has a headland that juts into it, making it roughly n shaped) and from the headland the view of the valley was amazing. Actually, the view all the way round was amazing! 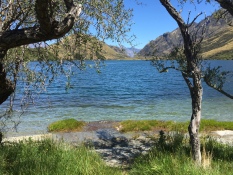 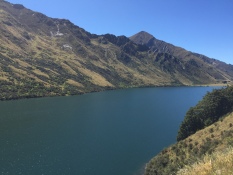 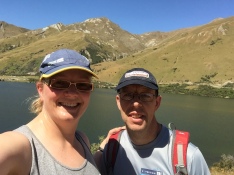 There is only one way to cool down after a 90 min tramp round the lake: a swim IN the lake! I had sized up the gap and it seemed quite short, a swim across to the headland was perfectly doable. Plus, the lake was warm enough to do it without a wet suit too, so why wouldn’t I! 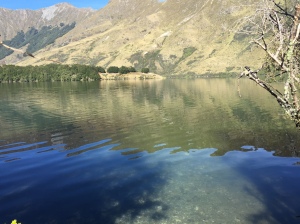 I swam from this bank to the headland dead ahead

I took the GoPro too as I am hoping to wear it when I swim the ruby next month so it was the perfect chance to practice with it. How super cool it was to do that too!

The hardest bit was getting a purchase on the rocks on the other side to pull myself out! Several broken nails, scratched knees and I was triumphant! I loved it! I could have spent all day every day swimming in there!

Tea with a view 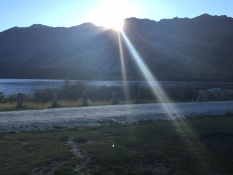 Scenic dinner, a beer and watching the sunset rounded off the day. What a blissful Boxing Day!

We took a drive up the road towards Glenorchy the next morning, wanting to go tramping into the mountains but conscious all the same that it was super hot so walking at midday may not have been wise. Silly us, of course we forgot that here is the hottest part of the day is actually late afternoon! Never mind, we drove the beautiful scenic route to Glenorchy at the top of Lake Wakatipu, a stunning drive, rather similar to the Devils staircase. The wee village we arrived in was an old logging / gold mining village, now a quaint little tourist destination and the start of the Routeburn track. 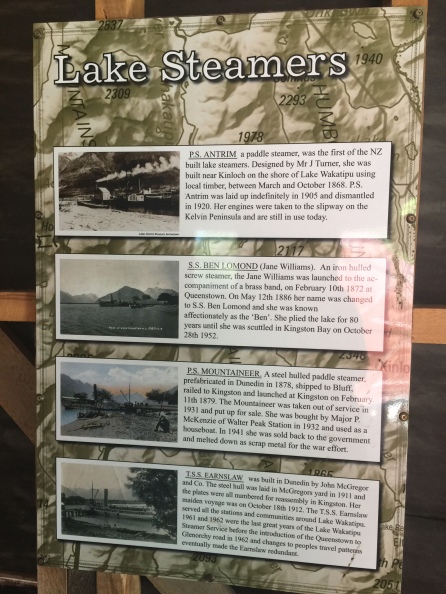 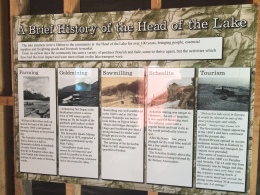 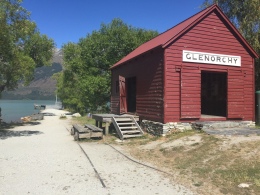 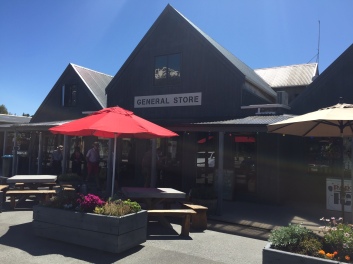 It boasts the shortest railroad in the world (from the shed to the jetty – see the photo!) and used to have four paddle steamers come in and out during its heigh day. A coffee and cake stop then we were on our way again.

Back at camp we decided to walk up the farm track which eventually led to Arthur’s Point: an 8 hour tramp. We knew we had not time for all of that so we intended to go for around 2 hours and see where we got to.

After going through stables and along the river we actually but constantly ascended into the mountains following the route of the river from a much more elevated position. The scenery was simply out of this world, whichever way you turned. Around 90 minutes and we arrived at a real steep decent to the side of the river again. This area looked a lot more man made, we wondered if this could be some of the old gold mines we had been told about.

Of course, we couldn’t continue without dipping our tired feet in the creek, McConagies Creek to be precise. It seemed to continue the path, the ascent out from the creek was just as fierce on the other side. We decided to cut our losses, as it was 4pm now, and start back again, still having the tough ascent we just came down to get back to the top anyway. And it was still real hot! We weren’t sure we had enough water with us to go any further on, perhaps next time (and on a mountain bike!) 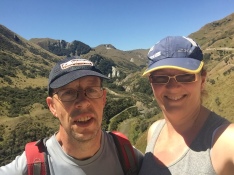 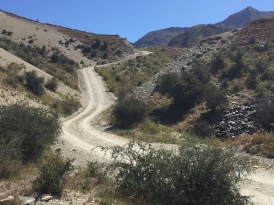 Words can’t describe, it was magical. Just a farm track, the odd cyclist and nothing but total silence. Beautiful. So glad we did it, 4 hours in all when we got back to camp.

Guess what was next: yep: another dip in the lake: the only way to cool down after a long tough hike! The sun was low so I went for a swim along the side of the lake rather than across: still just as wonderful, although this time I had a near miss with a passing kayak, despite my bright yellow cap! 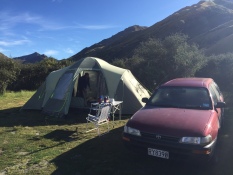