It’s been a weird and manic week, I feel like I say that a lot! We are still in the grips of early spring so the weather is a bit unpredictable and spring in the roaring 40’s usually brings high winds till around late November!

I did a day in the life of me video this week, a bit crazy when I look back at what I do in a typical day! Have a look, (follow the link) and I would love to hear what you think.

I also held a body image seminar on Tuesday which was met with fabulous feedback, I think I’ll have a go at recording it for YouTube as well as it received such positive feedback. I so definitely get what Taryn Brumfitt is saying with her EMBRACE movie. That is so me. to a T.

I also had a great time being interviewed by two of my younger clients, some of the questions they came up with were hilarious!

My why? Series on YouTube / Facebook is starting well and I have some people lined up to be interviewed, a long list of good Why? Questions so look out for those on Fridays (don’t forget to subscribe to the channel. 🙂

The new drugs are going well with the knee. I have been on 1/2 a dose a week with sickness tabs and it’s ok so far (the sickness) but the pain is .. so so.. haven’t tried a full dose or no anti sickness tabs yet. 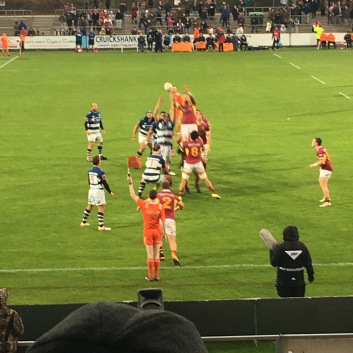 Stags played this week (lost again) but we had some all blacks in our midst for the opposition.. check out Malakai Fekitoa lurking mid photo here.

It’s that time of year again: Relay for life launch: we got a great site this time and have grand plans! (March 10th, 2018.)

And finally, it was the track cycling coaching today. It saddens me I can no longer ride the track (for now!) so i love to take people there, out of their comfort zones and creating magic!

I think that’s the week’s summary! Catch you next week!