No amount of watching YouTube videos or following other peoples stories online can ever prepare you for how truly awful the first week after a full knee replacement feels. I thought I knew what to expect, but man I seriously underestimated how hard this really would be.

Listen to this blog as a podcast instead

The morning of the operation I was trying to stay positive but quite frankly I was crying inside at the mountain of rehab I knew I would have post op, and how disabled I would be for such a long time.

I had to shower in Chlorohexidine (yuk!) and was only allowed to have toast, before 7:30am. Here are my knees before the operation. Admission was odd (it must be a kiwi thing, or maybe hospitals have changed in the 25 years since I was last in one!). After admission, I was left in a waiting room with all the others scheduled for an operation that day, all sitting in theater gowns. I was the only joint replacement on this day, because I was the only person who needed to have the chair disinfected before I sat down on it. Apparently they go all out in infection risk minimization.

The operation was around 2:45 hrs and took place at 1pm. My original intention was to be fully awake (spinal anesthetic). They wheeled me into theater and then I had to climb up onto the operating table myself sitting on the edge and arching my lumbar spine so they could get the spinal anesthetic needle in. In only a few mins I had already lost the feeling in my feet and when I was asked to swing my legs up onto the table I was already no longer able to do so. There was then a lot of adjustments to be made for two arm rests and a foot rest as the surgery happens with the leg in a stirrup and foot on a footplate, leg bent up to around 90 degrees to get maximum exposure to both the femur and tibia. They had to slide me up and down a few times to get me into position for the foot plate and stirrup to match up to my leg length. a tourniquet was then tightened around my mid thigh. All these adjustments took 30 mins, before they could even start the surgery.

My original plan was to stay awake but a series of unfortunate events (involving a formal complaint) in the days leading up to surgery meant that unfortunately I was too distressed to be able to remain awake and listen to the surgery take place so asked the anesthetist for partial sedation. I remember snippets of the surgery, but nothing meaningful enough to relay.

I was wheeled into recovery for a while then straight back to the ward. The plan was to have me on IV fentanyl short acting (which meant I also had to remain attached to oxygen) for the first few days. I had no feeling from the chest down so was also given a catheter (nice). The spinal anesthetic gradually wore off over the next 8 hours or so, meaning I had the feeling back in my feet by the following morning.

Oh, by the way, my new knee is made by Smith and Nephew apparently!

I struggled with a low BP all day today and also meds related nausea. This limited what I could do. Despite that the physios came round to get my bend going on while I laid in bed. I sat on the edge of the bed and used a frame to walk, but this was very brief as I felt too sick and risked blacking out due to low BP so I was returned to bed pretty fast.

Day 1 triumphs: although I was not able to lift the leg myself, I was able to hold it up briefly once the physio lifted my leg for me, which apparently is awesome for day 1.

briefly able to hold the lift

The IV pain relief had to be removed today as it was making me too sick. This meant that although I started to feel a bit better, the pain was of course, worse.

Because I had moments of feeling a touch better later in the day I was able to get up on crutches and walk a short loop of the ward plus sit in a chair (albeit briefly as I have a monster bruise forming on my hamstring!). They got me a CPM machine to keep it moving while I was too unwell. (continuous passive movement).

Rough night on day 2, the pain reached a full blown 10/10 and on top of that a new neighbour was snoring really really loudly. My lovely nurse wheeled me to the TV room and left me there overnight so I could at least get some peace, even if the pain was preventing sleep.

Today I was told that my discharge was dependent on the amount of flexion I was able to achieve which needed to be 80-90 degrees. This was enough motivation to start my self inflicted pain exercises immediately. However, I was still having a horrid time on the pain meds and once again was constantly vomiting rendering me unable to do anything. Enough was enough. The 8am oxycodone I took was going to be the last one, I had decided. I slept off the remainder of the nasty side effects (which had also extended to muscle tremors and a skin rash to add to the dizziness and constant nausea) but now I was also battling yet another painful side effect, constipation. I was not even able to keep the meds down that were meant to alleviate this.

by 2pm the Oxy had worn off and I started to feel a bit better. I had many arguments with a lot of the medical staff for the rest of the day about my decision. They said there was no way I would cope without pain meds. I reminded them (because none of them looked old enough to know first hand) that someone who has been waiting for a joint replacement has most likely been in intensive pain for a number of years. Pain I can do. sickness I cannot.

That was the turning point. I started to gradually feel better and was able to walk laps of the ward twice and I felt my walking getting better and better each time I practiced. I now noticed that the joint itself was not the cause of the pain, it the surrounding muscles more so. This is a totally different pain to the bone on bone pain you feel each and every day while waiting for surgery. I was up up and away. This decision to stop the drugs was the time I started to see a light at the end of the tunnel.

In summary, a lot more pain but a lot less nausea so this has got to be a plus.

This was a pretty special day. I was allowed to have a seated shower first thing, I was starting to feel much better (aside from the stomach pains) and I went for 3 strolls of the ward, each one getting better than the last.

The physio cleared my, after seeing me walking and managing to achieve a bend of 85 degrees. So then it was a waiting game to see if the rest of the team would allow me to be discharged.

I got the notification at 4pm, yes, I was good to go. I was so so happy. This has already been a tougher ride than I could ever have imagined but to get past the first benchmark really meant a lot to me. As did the first night in my own bed, even if it included less sleep than usual.

Kiwi was pleased to see me too, she had clearly missed me because we shut her out of the room in case she jumped on my leg in the night – but she persistently scratched at the door till I had to get up for a slow motion bathroom stop and let her in on my way back. ❤ 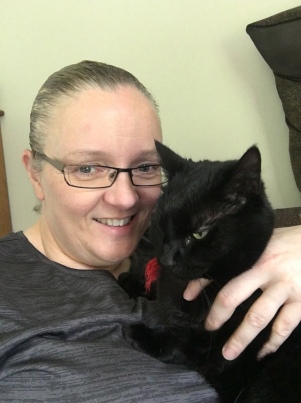 Don’t be misled here. The narcotics withdrawal symptoms are horrendous (and oxycodone withdrawal is apparently very like heroin withdrawal) so that alone is enough to make me feel like shit, never mind everything else! But, I will keep ticking off the tiny triumphs, crying tears of pain through the physio exercises and keep working on the flexion (the single most painful exercise of all of them) and I am sure the tiny triumphs will keep coming.

I still can’t sit in the front of a car, I still can’t walk all that fast, but I’m getting there, very slowly.

PS: I tried this morning, (day 5 post op) and I can still do this get up of the floor move that I demonstrated 1 day pre op, so that is also good news (just in case I fall over!)